Those of us equipped with a penis and who enjoy the arousing stimulation of the prostate intimately know how much of a struggle it can be to find well-built, quality-manufactured sextoys that can satisfy both of these sexual interests.

This is why when a leader in the sextech industry, a company known and respected for creating not only well-built, quality-manufactured products for about every sexual interest and configuration of genitalia on top of which paid attention to the opinions of their customers, made a prostate-massager a lot of people were turned on by the news.

And so the Lovense Edge rocked our anal-pleasure world: putting smiles on faces from Times Square to Timbuktu and all points beyond (including, dare I say it, New Jersey).

Then came the news that somehow Lovense managed to take their fan-favorite product and do the impossible by improving it.

Check the current price of the Lovense Edge 2
Contents show
What was so great about Edge 1?
One size that finally fits all
What are the Edge 1’s drawbacks?
The Edge 1’s disappointing playtime
All the improvements to the Edge 2
The Edge 2’s superior playtime
The Edge 2’s new magnetic charging system
Room for further improvements?
The Edge 3 as a plug-and-play sextoy?
A much needed software upgrade?
No matter what, the Edge 3 will be better

What was so great about Edge 1? There’s a kind of secret that some sextoy makers don’t like to admit. No, it’s not that the industry is actually run by a cabal of shape-shifting reptilian aliens from the center of the earth (for that, see my other articles), but that not everyone’s built the same.

Agreed, this may have made you mumble something along the lines of “what a let-down,” but let me explain a bit further. It’s that while you’re already aware that you don’t look like me—who also doesn’t look like this or that person—there remains a tendency for sextech designers to forget that our differences go deeper than that.

In other words, all of our insides are decidedly unique. The upshot of this that you can’t really produce a one-size-fits-all sextoy.

One size that finally fits all

Lovense, however, was well aware of this, and instead of turning a blind eye to human anatomical uniqueness, they produced a prostate-massaging sextoy built around the idea of it being as flexible as they could make it.

So the first Edge’s parts—the inserting portion and the exterior part—were both adjustable in ways very few other toys could ever hope to match. This subsequently allowed users, no matter how their interiors were shaped, to position the toy where it would work its prostate-stimulating magic.

In addition, the Edge was as powerful as it was quiet—or quiet as it was powerful: so it put its intensity where it would do the most, exciting, good while not frightening the horses … or let the neighbors in on what you were doing with it.

Then there’s the Edge’s brains as well as its not-at-all loud mechanisms, as Lovense had given it the same intelligent smart-tech as their other fine products: allowing their users to—compliments of the finely-designed Lovense Remote App—to finely tune the Edge’s vibrations, control it from anywhere in the world, have it work in concert with your favorite rocking tunes or accompany whatever sounds you might make while you when playing with it.

What are the Edge 1’s drawbacks? Alas, nothing—not even the state-of-the-sexual-art that was the original Edge—is perfect.

An excellent example of this is that while the Edge did an excellent job of staying where users wanted it to be, it still tended to … wander, would be a fair way of describing it.

Not that it went flying across the room at the first, muscular contraction of a user’s anus (and isn’t that a picture?), but that prostate massaging is all about control, and it can ruin the sexual mood when you have a toy that doesn’t comfortably hit the mark.

Then there was the pretty much universal headache at the heart of every sextech product. Or, at least, the one I’m becoming kind of known for complaining about.

I’m referring, of course, to battery life. And right along with that other thing I’ve ranted about: how these are build to products charge up.

At around an hour or so, the mark one Edge offered a respectful though not outstanding amount of playtime. Charging, meanwhile, was handled by a standard, everyday, run-of-the-mill plug system, which works well enough though can occasionally be problematic as there’s the chance that, should water or other kinds of (ahem) fluids enter the toy through it, the product could be damaged.

All the improvements to the Edge 2

So one of the first things Lovense did was change the overall shape of the first Edge, making its predecessor fit far more snuggly by making the bulb part significantly larger as well as reshaping its supporting arm.

And hurrah (and then some) for them for doing this, extra-so that they managed to accomplish this without compromising the Edge’s ability to be adjusted to put its vibrational power where it’ll do the most good.

As, after all, one of the biggest selling points of the initial Edge was that adjustability, us being unique in our gutty-works as I mentioned, so by Lovense making the new version more flexible, and so less of a strain to reach all those hard-to-reach but arousing places it’s a win-win. Or, more accurately, a win-win-win-win! Next, Lovense addressed the problem of that good-but-not-great battery life, giving the Edge 2 an upgrade—so now, on a full charge, the good times can roll (and vibrate) for more than an hour. 1.7 to be exact, on a good day.

They didn’t stop there, as they also tweaked the toy’s antenna so the Edge 2 will better acquire and maintain its all-important Bluetooth connection to the Lovense Remote app—whether a customer is using the Apple or Android smartphone version or the desktop (PC or Macintosh) version.

They didn’t stop with the antenna, either, as the inner workings of the Edge’s electronics got a tweak as well: one that Lovense says will further make the toy’s ability to take full advantage of the joys of the Lovense Remote app as never before.

And the good times keep rolling, as, on top of all this, they also dropped the plug-type charging system for a magnetic one, therefore eliminating any potential water or moisture gumming-up-the-works problems.

And this wasn’t merely a preventative decision, or at least I don’t think so, as the decision to switch from plug to magnets is also one of convenience. Not for Lovense and how adding this kind of power management system might make it easier for them to manufacture the Edge 2, but that owners of their cool toy can now just click the provided cable to the toy and, viola, they’re bringing all that all-important current into their toy.

All in all, Lovense has managed to pull off the impressive feat of taking what was a firmly-established prostate massager and delivering a toy that kept the good while giving their customers a more pleasurable and longer-lasting sexual experience. Agreed, I’m not an expert in sextoy designing, though I have written far too much on the subject, but taking a look at how Lovense re-thought and re-engineered the Edge, I couldn’t help but wonder what else they might want to consider changing in the possible next version of their prostate-massaging mechanical wunderkind.

Beginning with how, and again this is solely my opinion, the part of the toy that isn’t put into a person—their anus, to be blunt about it—seems to be wasted space.

So while it already contains the toy’s antenna, the manual controls, and the metal contact studs for the charging system, why not provide it with another, smaller motor? This way, it could be a fun addition to the Edge’s already exciting design by offering users the means to tickle not only their anus but their testicles, the penis, or whatever parts of their genitalia they like to have stimulated.

The Edge 3 as a plug-and-play sextoy?

Then there’s the idea of perhaps someday making the Edge, for lack of a better word, modular. Yeah, this might be a bit much, but these kinds of speculations can be a kick in and of themselves. For me, at least.

In my mind, the Edge 3 would have something like a socket at the end of that non-inserting part that users could plug in things like a cock ring to take advantage of the extra motor I mentioned, to give a nice, exciting buzz to the penis and testicles. Or, if that’s not someone’s thing, you’d have other attachments to try out or leave the Edge as it is if folx like it as a solitary prostate-massager.

A much needed software upgrade?

I’d also like to humbly suggest that Lovense do some software tweaking, and not only for the Edge line of toys.

I’m referring to that while they are respected for having created a stable and versatile variety of control apps, like giving their customers the option to use the Lovense Remove app with a smartphone (iOS and Android) and on their desktop computers (Apple and PC), not all of their sextoys can take full advantage of things like their interactive Mirror Life game (which I wrote about here). 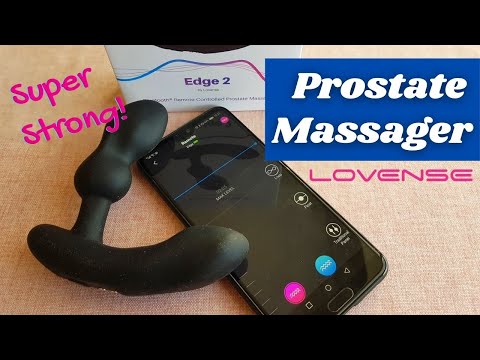 No matter what, the Edge 3 will be better

Yet when all’s said and done, these and the other possible improvements to the Edge 2 that popped into my brain were a bit of a stretch as Lovense has done with this upgraded version of their prostate-massager masterwork seems to be what was needed—and then some.

However, as that we human beings are as unique inside as outside, the other truth about the sextech industry is that though we may not immediately be aware of it, everything can be improved somehow.

The good news is that when it comes time for Lovense to work on the Edge 3, or the 4, 5, and so on, they’ll do it not to wrangle more coinage out of their customers but because they recognized—with the help of those very-same users of their products—that no matter what they or anyone else makes there’s always room for improvement.

Check the current price of the Lovense Edge 2