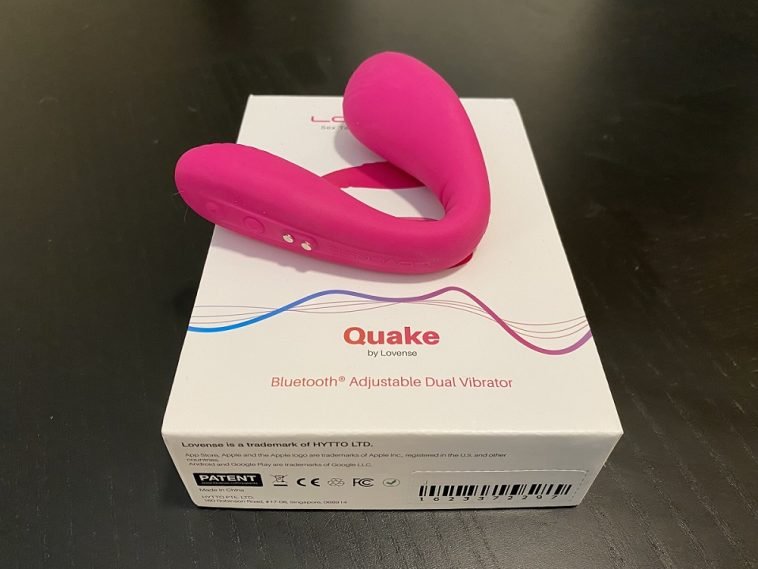 On average, I’m not one to cling to overly simplistic life lessons like “an apple a day keeps the doctor a day” or “a penny saved is a penny earned,” but one that immediately leaped to mind while giving Lovense’s brand new Dolce sextoy (previously launched as Quake) a try was “The measure of intelligence is the ability to change.”

Though the Dolce is an extraordinarily smart toy—something Lovense is well known for making—I’d like to amend that saying, replacing intelligence with pleasure.

Because the Dolce’s flexibility is what I think makes it a superbly enjoyable toy—and possibly the best Lovense has produced. 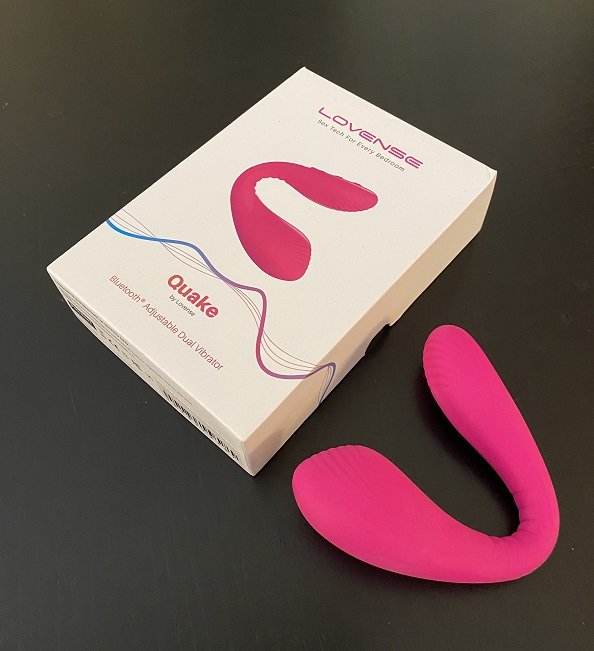 But I’m getting ahead of myself. So to begin, let’s take a gander at the Dolce’s overall shape, its flexibility I’m already gushing over, and how it works.

Designed for vaginal and clitoral pleasuring, the Dolce looks—and I know this is stretching things quite a bit—somewhat like a bulbous horseshoe in there’s a pair of slightly same-sized ends separated by a narrower section.

You might almost consider it a member of the Lovense’s Lush 3 family free as it works the about same way: the larger part is insertable into a vagina where its built-in motors stimulate the G-spot while the other, narrower end houses its controls, the wireless antenna, and provides equal, though less intense, vibes to the clitoral region.

It’s that though the Lush 3 was great at this, the Dolce is fantastic. Primarily due to its insane degree of flexibility, as I mentioned above.

Honestly, it’s flat-out bonkers, how you can twist, or its center section. Sometimes to where my partner and I were sure we’d break it.

But whatever the versatility paces I put it through, the Dolce kept going and going and going, though the toy’s user manual explicitly says it’s not a good idea to straighten it out completely as this might break it.

Even with this minuscule limitation, the Dolce is a groundbreaking achievement for Lovense—and sex toys overall. 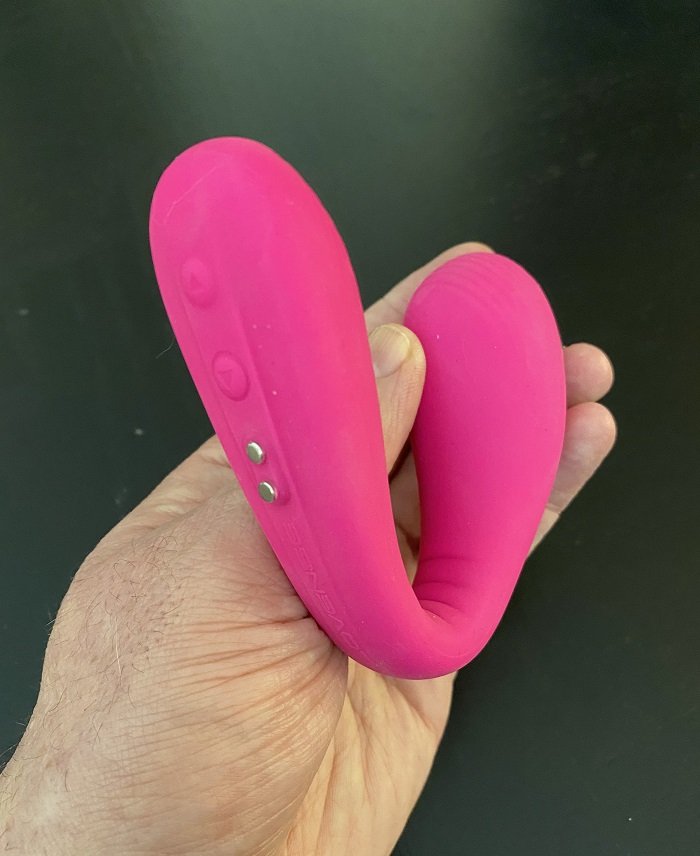 Going where you need it to go

With many sexual pleasure devices advertised as one-size-fits-all, it’s easy to forget we human beings aren’t identical: outside and inside, no two of us are the same.

So we often have to contort, finagle, otherwise attempt to conform ourselves to fit these standardized, inflexible sex toys—putting a severe dent in the amount of pleasure we get from them.

Some companies have attempted to address this, including Lovense. However, while there’s been a fair amount of success, one of them has managed to combine flexibility and versatility with all the electronics necessary to make a toy wirelessly smart.

Always up for a challenge, the boffins at Lovense took this challenge head-on: managing through their sextech wizardly, and perhaps a deal with the devil, to give us for the first time an Internet-compatible, dual function, and indeed is one-size-fits-all sextoy. 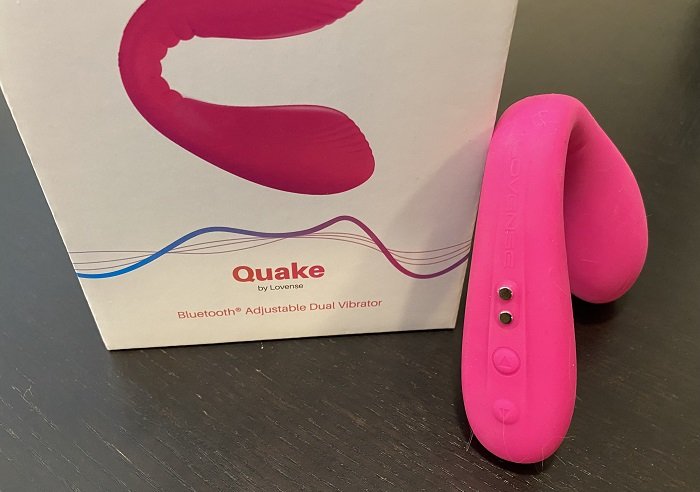 What the Dolce has going for it

So let’s get to the heart of what the Dolce brings to the party. In addition to how I’ve lauded over how you can put it precisely where it’ll do the most (sexual) good, it’s packed with some impressive under the hood statistics.

As in twin high-intensity motors: one for the insertable, G-spot stimulating part and another for its clitoral component—and both can be used together or independently through the toy’s built-in controls or via the Lovense Remote app.

Not to complain about Lovense achievements, while the Dolce has eight preset vibration patterns and a range of available intensities, I recommend using it with the app to get the most out of it.

During our experiences with it, my partner wouldn’t stop praising how finally here was a sextoy they didn’t need to turn themselves into an Olympic gymnast to enjoy.

They also enthusiastically raved how it was easy to pull the Dolce’s clit-stimulating end away or gently rotate the G-spot pleasing one to reduce its stimulation if things got a little too intense. 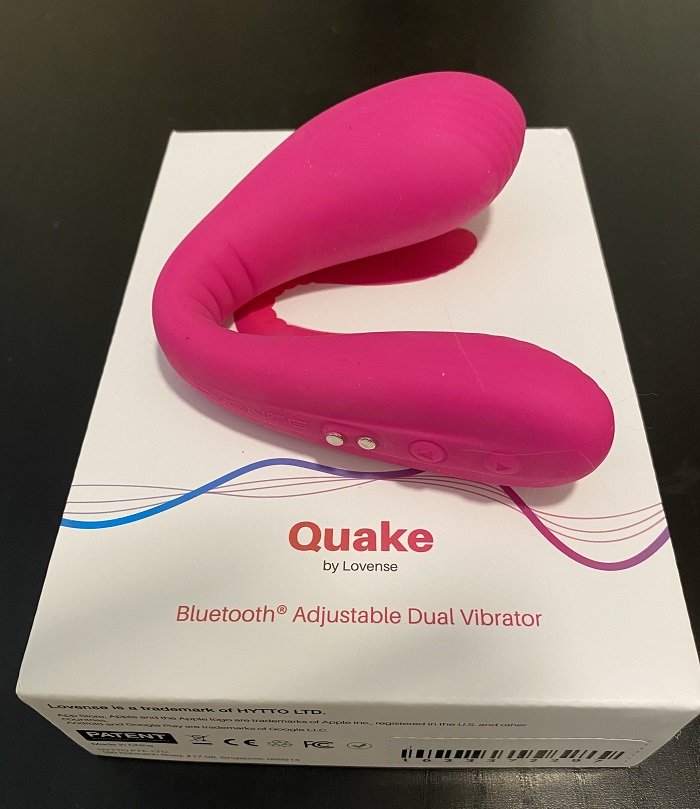 The Dolce’s overall design and controls

On the smaller, clit-pleasing end of the Dolce are its controls and power contacts.

The top, or rather towards the middle, are two embedded metal contacts for its magnetic charging cable. Below them is the power on button, and holding it down for approximately three seconds, will turn the toy off. It also By tapping it, you can also cycle through the toy’s built-in vibrational patterns.

Next up, er, I mean down, is the Dolce’s other button, the one controlling an identical set of preset vibes, but for the clit-stimulating end.

Drawing up the rear is the toy’s indicator light, which lets you know when it’s fully juiced up and ready for play.

Drawing a curtain on what I hope will be the very last time I mention my ongoing frustration with magnetic charging cables—since Lovense and a few other sextech companies seem to have finally gotten the bugs out of the system—I had nary a hiccup when I used the Dolce.

Charging to playtime is as impressive as the Dolce’s versatility, as on average, it takes 70 minutes to thoroughly do it, providing 120 minutes to relish its arousing power—or 240 hours in standby mode.

The Dolce’s size and weight

As ​​Lovense was kind enough to send me a Dolce before its general release to the public, and the toy isn’t listed on their site yet, I resorted to my handly tape measure to give you its approximate dimensions.

Tip to tip, the Dolce is around seven inches long, though as the manual suggested, I didn’t straighten mine out while measuring it. The G-spot part is an inch and a half wide and the same height. Flipping it around, the clitoral end appears to be an inch and a quarter wide and a touch over an inch high.

I do know how heavy the Dolce is, compliments of its manual: 146 grams—even more impressive considering what the toy does, how long it lasts, and its flexibility. 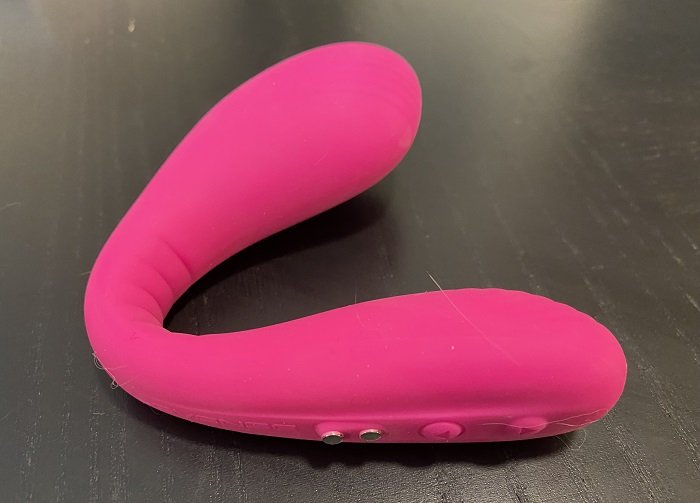 Lovense Remote and the Dolce

Stay tuned for more raving, positively, of course, as the Dolce takes full advantage of Lovense’s Remote app—and connecting to it was ridiculously easy.

Further testament to their dedication to quality, all I had to do was power up the Dolce, fire up the app, and bingo-bongo; I had complete, wireless control of the toy.

Ah, but not merely the entire toy, as the app allows you to operate the two separate sections independently: so I could increase or reduce the vibrations of each whenever I, or my partner, wanted.

It’s a little embarrassing to admit that despite fooling around with toys like the Dolce was a kid-in-a-candy-store experience for a technofetishist like me, I hadn’t kept up to date with the latest Lovense Remote build.

I’m sure glad I did as the devs have outdone themselves, smoothing it out, making it far more intuitive, and taking full advantage of the Dolce’s teledildonic wonders.

For instance, they’ve added an option to choose between traditional up and down sliders or floating buttons, providing a more nuanced, intuitive control over the Dolce’s motors.

Available for Android, iPhone, PC, or Apple computers, the Lovense Remote’s also been tweaked so you have to sign into Lovense to use its long-distance play options or access the member-created vibration playlists. 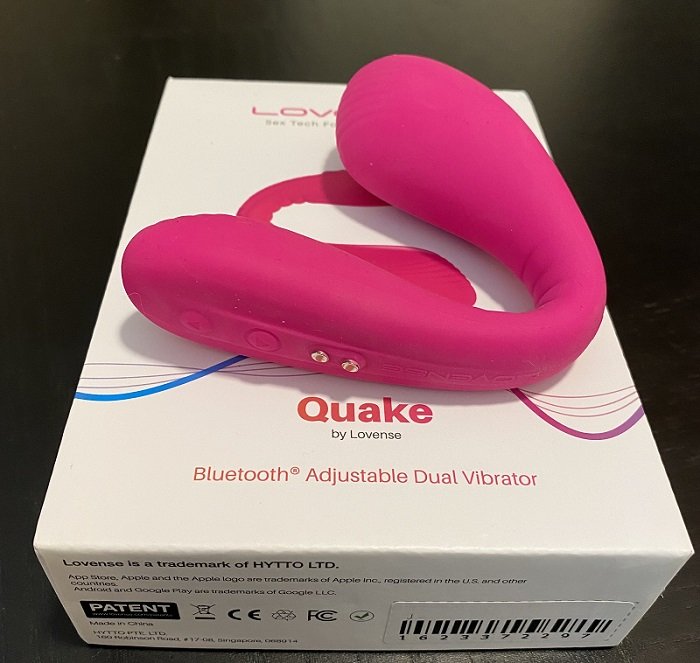 Cleaning and maintaining the Lovense Dolce

Lovense’s respected as much for the quality of their smart sex toys as they are for their easy cleaning.

You can use a Lovense approved sextoy cleaner, as well, though if you have some, it’s still nice to know if you run out, or forgot to it pack in your travel kit, a splash around in the sink can do the job as well.

Before I forget, as the Dolce’s made of body-safe silicone, it’s also waterproof, so if bath or shower time sex play makes you nice and steamy, you can take it into either—but keep it away from bubbling hot tubs or ocean waves as anything except for tap water will ruin the toy’s silicone skin.

What you get with a Lovense Dolce

With the toy, purchasers get a charging cable, a neat little bag for storage, a well written and informative, quick start guide, and a more comprehensive user manual.

If anything goes wrong with your Dolce that isn’t user-error—like flexing it more than is recommended—it comes with a one-year warranty. Nice enough as this is, I don’t think it’s something you’ll be using as Lovense’s products are some of the best manufactured and exceptionally engineered sex toys you can buy. 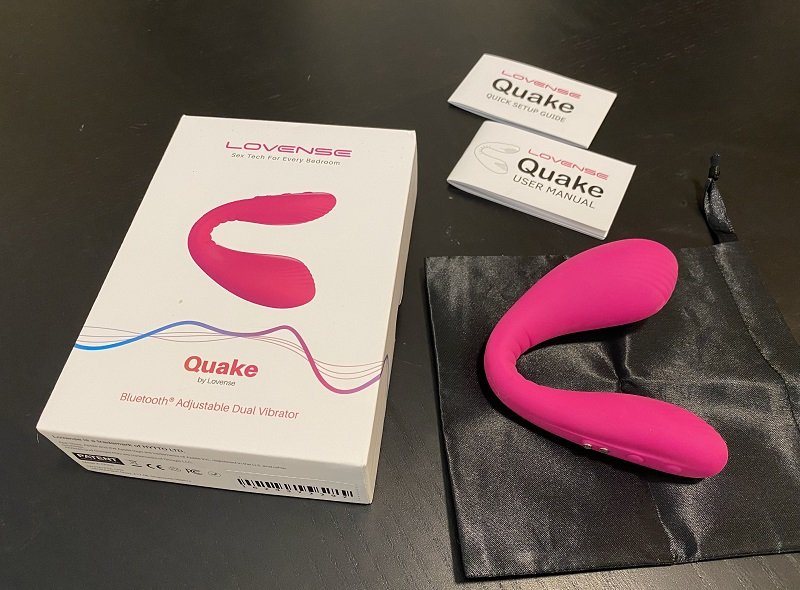 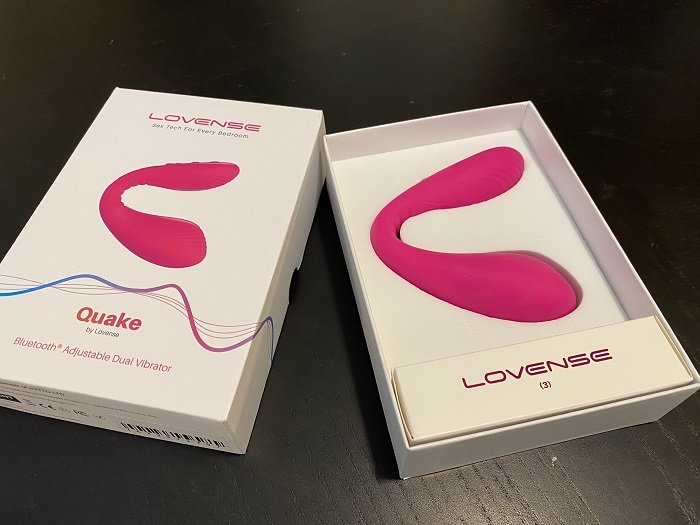 It shouldn’t come as a surprise my final word on Lovense’s Dolce is it’s a must-buy sextoy if you, or someone you play with, has a vagina and clitoris.

The only reason I can of why it shouldn’t be on your shopping list is if this vaginal/clitoral at-the-same-time sexual pleasuring isn’t a favorite. I’d be like buying a Bugatti Veyron if all you’ll ever going to use it for is to go to the corner store and back—unless it’s at the end of the Nurburgring, that is.

Without a doubt, the Dolce is a brilliant sextoy. Not to take away from its innovative design and top-notch engineering, I’d dare to say there’s still room for improvement.

Ironically, it’s in what makes it so special: its flexibility. I’m not sure what I’ll take, but I’d love to see a Dolce 2.0 with less or, if possible, zero limitations on how curved or straight you can make it.

A minor quibble, to be sure, and not nearly enough for me to change my mind that the Dolce is a must-own plaything for clitoral and vagina owners.

Additionally, it’s a lesson for sextoy manufactures everywhere: power is great, good controls are essential, Internet and wireless connectivity are a mainstay, charging and cleaning’s gotta be easy, and nothing beats a sextoy which works with and not against our uniquely human bodies.

Since the most vibrationally enjoyable plaything is worth squat if no one can get it where they want it.

Lovense shows with the Dolce that they totally get it—much to the delight of sexual people everywhere.