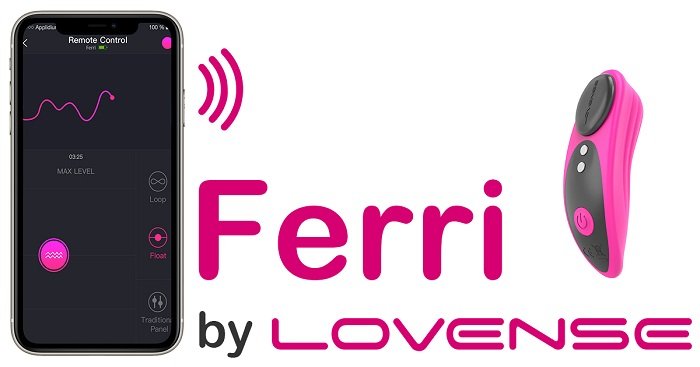 So there you are: sitting by yourself in a white tablecloth establishment, engaged in a fine dining experience—with, perhaps, a slight, knowing smile on your face—when unexpectedly, delightfully, and notably remotely, your lover suddenly propels you towards orgasmic bliss.

So let’s take a thoroughly exposing examination of this new toy and see if it’s a hidden gem or a sextech flop that should be out of sight … and out of mind.

Check the Price
Contents show
The Ferri: size matters
What the Ferri brings to your panty
Some thoughts on public play
The Ferri’s undercover—and exciting—features
Measuring the Ferri
Cleaning the Ferri
What you get with a Ferri and to set it up
Pros
Cons
The verdict 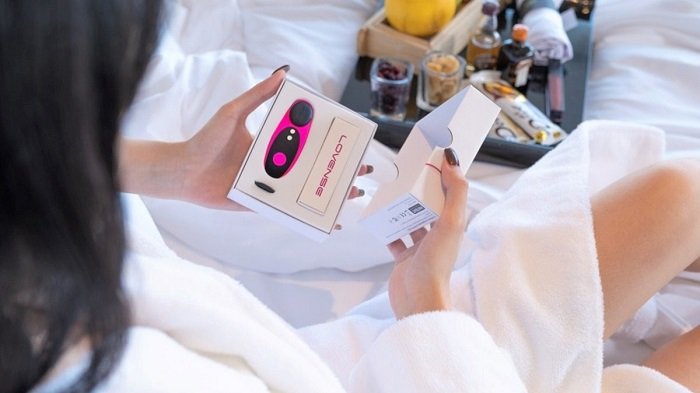 Since I’m talking about a Lovense product—and that after reviewing a number of their toys, I remain a fan of their dedicated workmanship and the company as a whole—that “out of sight, out of mind” bit I used isn’t exactly appropriate.

Instead, the question is if the Ferri’s good for you—and to get into that, let me begin by getting into more detail about what this novel device is.

As Lovense describes it, the Ferri isn’t a massive, throbbing, industrial-grade device—though they packed a considerable amount of vibrational goodness into it—but a remarkably teeny-tiny toy designed to be placed between a vulva-equipped person’s genitalia and their knickers.

But the Ferri, sticking with my use of “next-gen,” is way brainier than that dumb cousin, as Lovense’s stuffed it full of their trademark, well-regarded, smart, sextech electronics as well: allowing users to do what every other Lovense product can. Including the ability to be remotely controlled practically anywhere in the world—thus my fictitious lover’s ability to “switch” on their partner’s pleasure.

What the Ferri brings to your panty

All of which I’ll cover a lot more after I next explain how the Ferri’s panty-nestling system works. But before that, I need to provide a breakdown of what the Ferri looks like and how it operates.

Unlike some vibrators, the business end of this Lovense product is on the opposite side of its control, which might take a bit of getting used to if you’re planning on trying it out sans attaching it to a pair of panties. 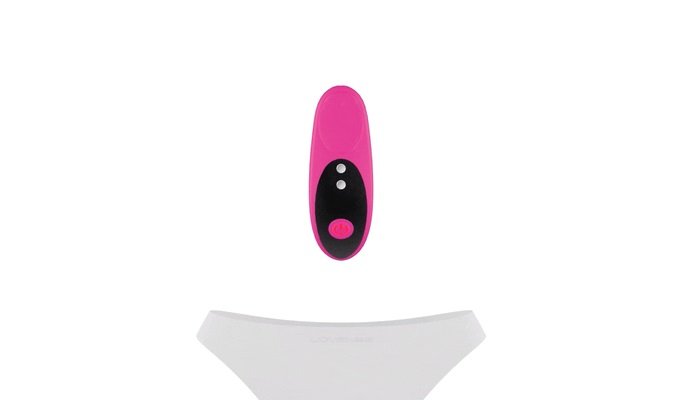 If you were paying attention, you noticed I said “control” instead of “controls” as the Ferri has a single button to power it up or switch it off and cycle up and down the intensity of its vibrations.

Above that magic button are the contacts for the toy’s magnetic charging system, and, staying in that direction, is the blank space that plays such an essential part in how the Ferri stays where you want it to in your underwear.

Included with it are two small, black discs—the extra if the first gets lost, which is a problem I’ll touch on shortly—that uses magnetism, though in this case to keep the Ferri from dislodging from your unmentionables.

How you get it “just right” may take trial and error. However, I imagine beginning by stepping into your drawers, pulling them halfway up, using the toy and magnet to get it somewhere right, and finishing up by making any needed adjustments when it’s completely on could do the trick.

Rather, give yourself time to get comfy with it, including which panties it does or doesn’t work well with and what kind of activities you can do when it’s attached—as few things are more embarrassing than, as you stroll out into the world a buzzing plaything plops at your feet.

Some thoughts on public play

Not to hopefully sound more like the crusty old curmudgeon that I already am, and not to give the big-brains over at Lovense any unnecessary grief, I’d like to bring up that there’s an ongoing debate going on if public play is appropriate.

It all hinges on the importance of consent: that if the people around you did not willingly grant it, by doing anything involving them—such as being an unwitting audience to your exhibitionistic enjoyment—could be interpreted as anything from extremely inappropriate to sexual assault.

So, if you’re willing to take the advice of someone who’s done a lot of things over the years, think twice—and then ten or twenty more times—before stepping out with a Ferri tucked into your panties.

Unless, of course, it’s to a sex or kink-friendly space where your antics will be appreciated—and won’t get you busted for public indecency or end up getting you placed on the Sex Offender Registry.

And, yet again, it’s Lovense smart: so with it, you can take full advantage of this company’s brilliantly interactive features—as with most of their other products.

Such as the ability to wirelessly connect your Ferri to Lovense’s superb Lovesense Remote app—available for Android, Apple’s iOS, PC, and Macintosh computers—where you can increase or decrease the toy’s vibrations, assemble your own playlist of patterns you can playback at any time you wish, or set the Ferri up to respond to sound or in sync with your choice of music. 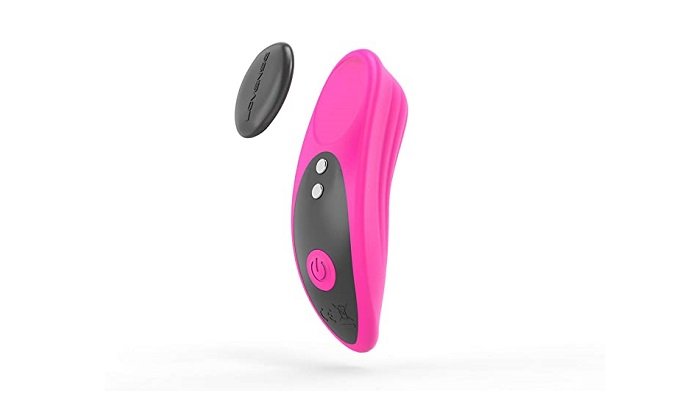 Then there’s its ability to grant your lover the power to “reach out and touch” you anywhere: from the intimate confines of your bedroom to anywhere in the world—as long as your playmate has access to Wi-Fi, of course. Included in the Lovense Remote app is also a video chat feature so both of you can see and feel connected.

And don’t worry about the Ferri not being able to “go the distance,” as Lovense says that after a full charge, this intimate little gizmo can go on and on and on to the tune of 3 to 3 and a half hours!

Adding to its resume as a private toy, for all its power, the Ferri is far from being notice-me loud: with Lovense saying, even at full-tilt, it’ll remain a hushed 43dB—and probably less than that as a lot of the noise it does make will be somewhat muffled by your knickers on top of whatever else you’ll be wearing over them.

Like Lovense’s other great products, it’s made of body-safe, non-reactive silicone and is listed as IPX7 waterproof. Though keep it well away from anything except bathroom splishy-splashing as seawater, or the contents of a hot tub, won’t do its outer-covering, or inner workings, any good. 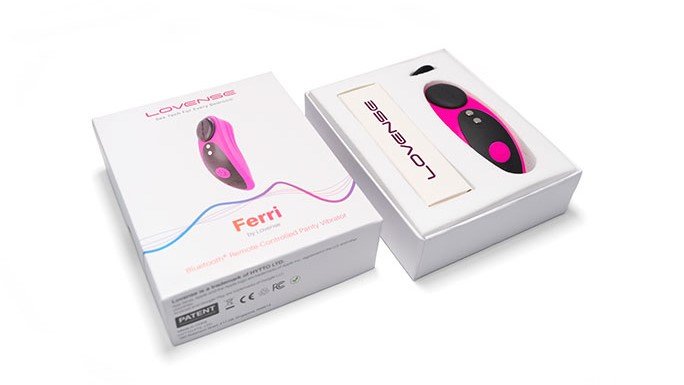 When you’re done with your Ferri, cleaning it up is just a matter of warm water, mild dish soap, and dry with a lint-free cloth. Do not, and I can’t emphasize this enough, use any clearing solution containing alcohol or acetone as it’ll wreck the toy’s silicone worse than if you took it to the beach or a hot tub.

Considering how we’re trying to be cleaner-than-clean these days, including diligently slathering our hands with sanitizing gels, please don’t extend this to your Ferri or any other sextoy made of silicone.

In all honesty, it really just takes good old soap and water to make it as spic and span as you’ll ever need—even if you happen to share your toy with another person. The same goes for dropping into a pot of boiling water. Sure, it’ll sterilize it—at the cost of totally ruining the toy.

What you get with a Ferri and to set it up

In addition to the toy, Lovense provides the usual amenities such as a user manual, a quick start guide, a warranty card (good for a year), a USB charging cable, a bag to put the Ferri in when you’re not using it, and that extra magnetic piece I mentioned.

If you have any experience with Lovense, notably their software and the like, the following will be old news. However, if you aren’t, take a deep breath as measured up against other sextech manufacturers; Lovense routinely takes the pastry regarding ease of set-up and use.

Considering what Lovense Remote app you’re using—smartphone vs. computer, etc.—to get the interactive show on the road, put your Ferri into Bluetooth stand-bye mode. Next, open the app and, after making sure you’ve turned on Bluetooth there as well—look for the toy and, finally, hit the connect button. 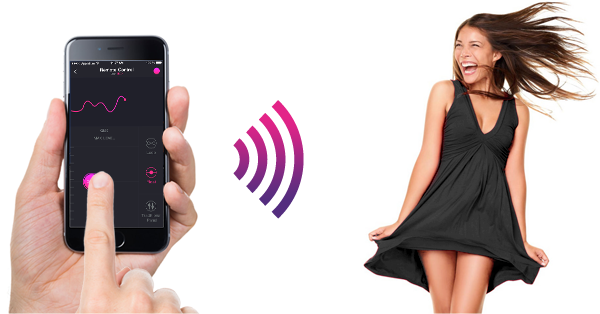 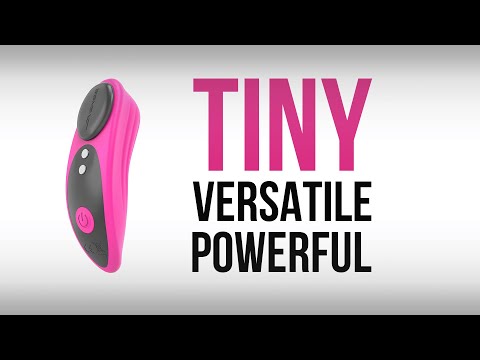 And so my opinion about the Ferri is—cue the drum roll—it depends.

Yeah, I know you were probably hoping for either a “hidden gem” thumbs up or “out of sight, out of mind,” but I’m afraid I can’t deliver anything as simple as yes or so.

As it really does depend, and not in one consideration but several. I can, though, drop a few certainties: the predominant that since this is a Lovense product, it’s exceptionally well made, intelligently designed, and its software—notably with all their interactivity bells-and whistles—remains the best in the business.

Their Ferri, I hate to say, does need a few improvements, though. Not, again, in the toy itself, but that—and I know this may sound like a petty quibble—they include a single extra magnetic disc.

It’s that for a toy designed to be worn while the wearer moves about, resulting in things shifting around, there’s a high likelihood they’re going to need a lot more than just two of these discs.

Naturally, if this does turn you on—despite my small tisk-tisking over it coming with two discs—the Ferri should be at the very top of your sextech shopping list.

Just do me a favor, and when you do get it, don’t run, giggling with anticipation, to your most cherished eatery to feast on a well-prepared meal and to gorge yourself on the hot and spicy delights of covert exhibitionism.

Because ethical and responsible, sexual showing off requires that everyone there, no matter who, has to be aware of what’s going and consent to participate in the fun. Otherwise, enjoying finely made sextech or not, you’ll be guilty of non-consensual sex.

If having a pleasantly buzzing device in your panties, extra-so when it comes from an industry giant like Lovense, makes you hot and steamy, get a Ferri—just don’t let your tickled-clit fog your judgment.