The little man in the boat, devil’s doorbell, butter bean, happy button … whatever you happen to call it if you have a clit you know how challenging it can be to find a sextoy that pleasantly and effectively paddles your pink canoe.

Too strong, not strong enough, hard to handle, tough to control, the list goes on and on. So much so, many clit-owners have all but given up hope they’ll ever find the right toy for this very right job.

Check the Price of the Lovense Hyphy
Contents show
Taking a look at the Hyphy
What the Hyphy does and how it does it
Measuring the Hyphy
Power and cleaning
What you get with a Hyphy
Hyphy and Lovense Remote
Pros:
Cons:
The verdict

Taking a look at the Hyphy

No insult to Lovense, but at first glance, the Hyphy screams less sextoy and more medical implement. But as the old saying goes, looks aren’t everything and more so when talking about pleasure devices: what arousing sensations they deliver are always far more important than their appearance.

Though it would be more accurate to call it excellently clever in design as the dual refers to how it’s a double-ended sextoy: the small end designed for pin-point clitoral stimulation while the handle, equipped with its very own motor, is built for G-spot play.

And as no clit is ever the same, the Hyphy comes with two special attachments that completely change how it feels: guaranteeing that whatever you like and how your body is shaped, you’re going to have a rockin good time with it.

But that’s not all, as Lovense has been remarkably forward-thinking to package the Hyphy with a specialty-designed carrying case for the toy; all of those attachments also serves as a charging station. 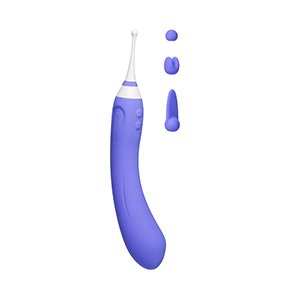 What the Hyphy does and how it does it

Any other company would probably have decided one motor was more than enough for a toy this size, even when marketed as a two-ended model.

Not Lovense! Instead, they equipped their Hyphy with a pair of them: obviously understanding you can’t expect a single to be able to handle putting out those deep, throbbing vibes G-spot pleasuring usually requires, and the upper-level frequencies clit tickling needs.

And since they’re rightfully considered a forward-thinking company in the field of smart-tech integration, the Hyphy can be operated either with its built-in intuitive controls or via the Lovense Remote app.

Set slightly below the clit-vibrating end of the toy, the former is made up of two buttons: the top one acting as a power switch as well as cycling through the Hyphy’s clit-stimulating end’s three power levels and four pre-programmed vibrating patterns. With the same power levels and patterns selectable for its G-spot by pressing the second lower button.

On the other of the toy are the contacts for the toy’s provided magnetic charging cable. But what makes the Hyphy unique, and not just when compared with other Lovense but every other one I’ve had the pleasure to test-drive, is its nifty carrying case that not only keeps it clear and secure but compliments of its own set of integrated contacts charges the Hyphy to when nestled into it.

The case also keeps the Hyphy’s two extra clit-end attachments from getting misplaced or linty. The first is your standard small-ish ball, perfect for all-over vaginal play in addition to pinpoint clit stimulation. The second is a sort of U-shaped top for those who prefer their vibes to be slightly less direct and is also excellent if you like your nipples to get a workout as well. Then there’s the little bitty licky attachment that does a superb job of mimicking oral sex. 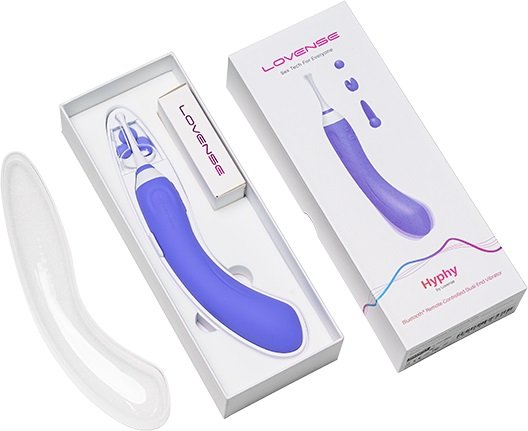 From stem to stern, the toy is 8 ½ inches long, of which the insertable G-spot insertable end is a little more than 4 ½ and slightly less than 1 ½ wide—which is as big as the Hyphy gets, with the clit-end coming in at around ¼ inch in diameter. Its carrying case, as it’s designed to closely approximate the toy’s overall dimensions, is a bit larger.

And if you enjoy getting really wet, the Hyphy is IPX7 waterproof for bath or shower-time sexytime. No doubt a relief to more than a few clit-owners out there as many first discovered the joys of playing with their pearls while fooling around with shower attachments.

As I mentioned, you have the choice of charging the Hyphy directly or by attaching the magnetic cable to a set of contacts on the case.

Taking the toy’s battery from wholly depleted to fully charged will take you about 75 minutes, for 310 minutes of playtime or an impressive 120 hours while on standby.

Like other silicon-covered sextoys, to clean the Hyphy, all you need is a gentle wash with warm and never too hot water, some antibacterial soap, and followed by a good dry with a lint-free cloth.

While it’s wonderfully waterproof, please restrict your sexy-splashy times to the bath or shower since the ocean or fooling around with it in a hot tub will damage its silicon outer covering. 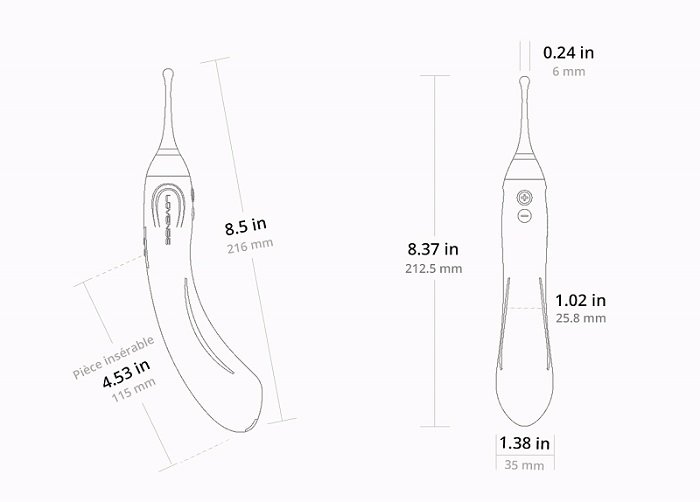 What you get with a Hyphy

With the toy, its stylish case, the three attachments, and a charging cable, Lovense provides Hyphy owners with a quick setup guide and a more comprehensive user manual.

If you’re like me and find reading fine print practically impossible, you’ll be relieved to hear the Lovense site has online PDFs of all those materials and step-by-step guides to wirelessly connecting the toy to the Lovense Remote app. 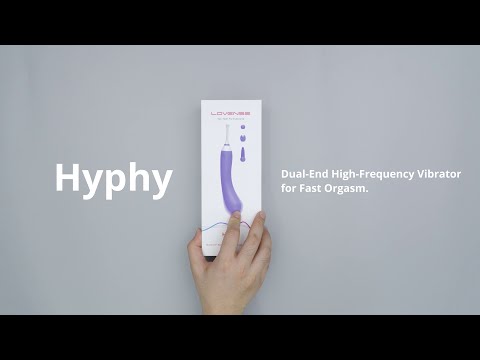 Phenomenally well-made toys are one thing, but when it comes to ushering in the future of sexual technology, few companies do it better than Lovense.

A perfect example is their array of apps and programs designed to maximize the benefits of sextech integration. For Apple or Android smartphones, this takes the form of their Lovense Remote app, which, when paired to a toy like the Hyphy, allows users to fine-tune its vibrational ups and downs, create or share their own patterns, enable it to respond to music or ambient sounds, as well as grant or take remote control for interactive long-distance sexual activities.

But if you don’t have a current smartphone and your PC or Apple computer is Bluetooth-enabled, you can do the exact same compliments of the desktop version.

With so many companies apparently dropping the ball when it comes to getting one of their toys to sync up with an app, doing the same with any Lovense product is an unmitigated delight, with often it merely requiring a single button push on something like the Hyphy to get the Lovense Remote app to connect to it. 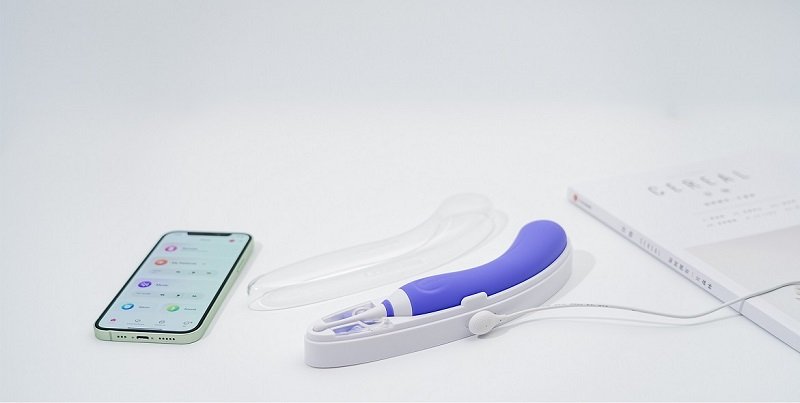 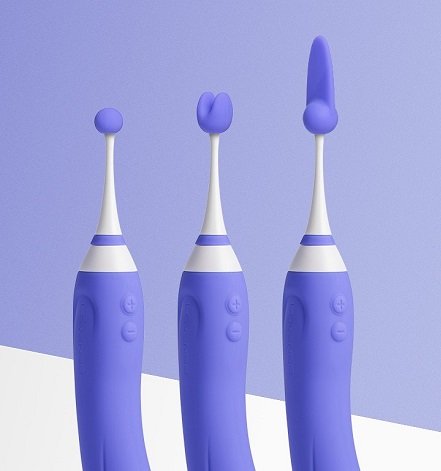 I love Lovense. Sure, because I get to take their products out for a spin, but aside from the perks of being a sextoy reviewer, I honestly consider them the bleeding edge leaders for their elegant design aesthetics, remarkable engineering, meticulously fine engineering, and brilliant sextech integration.

What, you were expecting a “but” after all that? Hate to disappoint, though while I think there are a few teeny-tiny things Lovense could have done differently, it doesn’t change my mind that their Hyphy should be considered one of their best.

However—and notice I still didn’t use “but”—I’d like to, if not wag, then wriggle my finger at them. Mostly their frankly odd choice of giving us a clear-lidded case for the Hyphy as a shaded or fully colored one wouldn’t have been that hard to do. The same for the case’s general shape, especially as a few of their competitors understand their customers may not always be up for putting their playthings out where people might see them.

My other criticism is similarly a design one, as my test-pilot found when using the Hyphy, the clit-end’s narrowness made it handle less than ideal as a handle. Though they also came up with a great solution by suggesting Lovense offer a special cap to snap over the clit end to give users something to hang onto.

Despite all this, my final say on the Hyphy is if you have one or play with anyone equipped with a clitoris and get off on stimulating it along with doing the same to their G-spot, nothing comes close to beating this new toy from Lovense.

Further backed up by their insanely good sextech track record so while taking total, and pleasurable, advantage of the Hyphy’s special hardware while playing well with others—wherever on the planet they might be—or fine-tuning your arousal without struggling with sloppy software issues.

Should you get a Hyphy? For sure, as here’s a two-headed, high-octane, brainier-than-Einstein sextoy that’ll cleave your pin, kick your beam, break your arrow, jet your juice … and make you come like nothing else!

Check the Price of the Lovense Hyphy